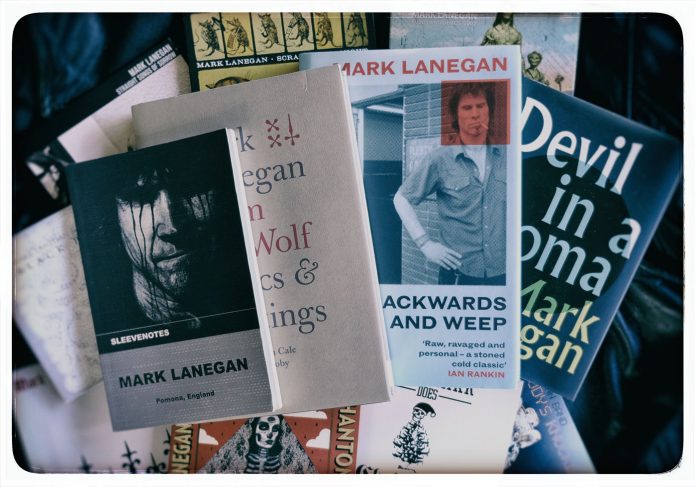 I Am the Wolf: Lyrics and Writings

A collection of lyrics and autobiographical commentary by singer Mark Lanegan, with a preface by John Cale and a foreword by Moby.

Musicians choose favourite tracks from their back catalogue and provide telling insights into their creation, meaning or mood.

Sing Backwards and Weep: A Memoir

This gritty bestselling memoir by the singer Mark Lanegan of Screaming Trees, Queens of the Stone Age, and Soulsavers documents his years as a singer and drug addict in Seattle in the ’80s and ’90s.

Do we sing what we write or write what we sing? Lanegan and Eisold come together to present words of dystopian desolation. Plague Poems is a collection of 23 poems written by each, for love – lost, losing, and even sometimes found. Written in February and March of 2020, the subconscious presents a narrative of love in the end of days.

Leaving California is the new collection by Mark Lanegan, compiling 76 poems that merge the line of harsh reality and paranoia, beauty and reflection, and the wisdom of the escape artist. There are amends and curses amongst stories that one can only tell once they’ve seen everything and everything collapse. In many ways this is part two of Lanegan’s best selling 2020 novel, Sing Backwards and Weep, where loose ends are tied and others left for dead.
A brilliant work of true transformation, these poems also chronicle Lanegan’s exit from California for the literal greener pastures of Ireland. As someone who has survived it all, he must have known this move was the next level of perseverance. There’s a pacing anxiety leading up to the move, turbulence in the transition, and a calm consideration once he’s settled.

Devil in a Coma

One morning in March 2021 with the second wave of infections ripping through Ireland where he was newly resident, Mark Lanegan woke up breathless, fatigued beyond belief, his body burdened with a gigantic dose of Covid-19. Admitted to Kerry Hospital and initially given little hope of survival, Lanegan’s illness has him slipping in and out of a coma, unable to walk or function for several months and fearing for his life.
As his situation becomes more intolerable over the course of that bleakest of springs he is assaulted by nightmares, visions and regrets about a life lived on the edge of chaos and disorder. He is prompted to consider his predicament and how, in his sixth decade, his lifelong battle with mortality has led to this final banal encounter with a disease that has undone millions, when he has apparently been cheating death for his whole existence.
Written in vignettes of prose and poetry, DEVIL IN A COMA is a terrifying account of illness and the remorse that comes with it by an artist and writer with singular vision.

Year Zero – A World With No Flowers is the second book in the Lanegan / Eisold trilogy and the follow up to Plague Poems.

Resurrection poems written with vitriol and irreverence in the middle space between life and death. The authors look forward and backward and inside and out.

Ghost Radio is the third and final book in the Lanegan / Eisold trilogy following Plague Poems and Year Zero – A World With No Flowers.

When only words are immortal.